DCC Empire of the East is a setting for the Dungeon Crawl Classics Role-Playing Game that offers a portal to the singular world of the novels The Broken Lands, The Black Mountains, and Changeling Earth by Fred Saberhagen, and officially licensed by his estate.

I saw that GG will be making Empire of the East RPG from Fred Saberhagen's books of the same name. Awhile back I had sent GG a message suggesting approaching the Saberhagen estate on obtaining rights to a RPG based on Saberhagen's "Lost Swords" series. But I guess they decided this was a better fit. Ive never read that series, but I guess I will. The LOST SWORDs series is a favorite of mine. A bit slow in parts, but a lot of fun. Hopefully they get to the Lost Swords, it comes after The Empire of the East and is loosely connected.


Here is the Song of Swords, that gives clues to the swords powers.

THE SONG OF SWORDS

But the Sword of Chance, to please the gods


The Sword of Justice balances the pans

Of right and wrong, and foul and fair.

Eye for an eye, Doomgiver scans

The fate of all folk everywhere.

Reaching for the heart in behind the scales.

In the belly of the giant that my blade impales.


Farslayer howls across the world

Vengeance is his who casts the blade

Yet he will in the end no triumph see.


Whose flesh the Sword of Mercy hurts has drawn no breath;

Whose soul it heals has wandered in the night,

Has paid the summing of all debts in death

Has turned to see returning light.


The Mindsword spun in the dawn's gray light

And men and demons knelt down before.

The Mindsword flashed in the midday bright

Gods joined the dance, and the march to war.

It spun in the twilight dim as well

And gods and men marched off to hell.


I shatter Swords and splinter spears;

My point's the fount of orphans' tears

My edge the widowmaker.


The Sword of Stealth is given to

One lonely and despised.

Sightblinder's gifts: his eyes are keen

His nature is disguised.

But doth the spirit carve

But many left to starve.


The Sword of Siege struck a hammer's blow

With a groan, and a roar, and a tower's fall.

Hard walls it builds around the soft

The fighter who Townsaver takes

Can bid farewell to home and croft.

Its master's step is brisk.

The Sword of Wisdom lightens loads

But adds unto their risk.
To defend: This is the Pact.
But when life loses its value,
and is taken for naught -
then the Pact is to Avenge.
Top

I am also eager to hear about this! EotE is one of my favorite Appendix N series (even though only the 3rd book actually 'made it'). I haven't heard much about it as of late ... I think there was an end of year-ish release date project back in March ...

Actually, Saberhagen is one of those et al writers, it's just that Changeling Earth gets specifically called out.

I wish I knew the planned order for releases -- but I imagine DCC Dying Earth and DCC 100 will be out before EotE. At least one of those first two will probably not be out until a GenCon 2020 preview release of limited quantities, since that's been the pattern the last few years (this past GenCon was the debut for the Annual and the new version of Chained Coffin).

I don't know the Swords books... are they more 'straight up' fantasy? GG might've chosen EotE since it's more unique, if that's the case... Or maybe it comes down to the publication dates -- maybe you can't play "as 1974 intended" in a setting from the 1980s...

Has a revised release date been announced?
Top

I'm really interested in this as well. For me it's the most interesting DCC title in the last couple years. I contacted Goodman Games several months ago about an updated release date, and was just given a "we're announcing it soon" response. As far as I can tell there hasn't been an update.
Top

I'm really interested in this as well. For me it's the most interesting DCC title in the last couple years. I contacted Goodman Games several months ago about an updated release date, and was just given a "we're announcing it soon" response. As far as I can tell there hasn't been an update.

check out what's new with GG event on GG twitch TV. i think it will be now boxed set and it should be kickstarted this year, if gods of pestilence ease their grip on hyboria... errr... world. i think that writing has been done. but go and check out the event, i was more concentrated on DCC dying earth.
Top

It's only mentioned for a brief moment (along with the 5e version) at the beginning of the video. No dates or timelines. Sad

GG newsletter from the table of the dark master himself


But I think the next Kickstarter might actually be a physical book. Our DCC rulebook for Fred Saberhagen’s Empire of the East series is nearly complete, and it looks fantastic. It’s nearly ready to unleash upon the world, and I think you guys should see it as soon as we can get it to you!

As any Appendix N fan knows, The Empire of the East is a trilogy set in a post-apocalyptic future. After the nuclear winter, magic returned. Demons and elementals walk the land, alongside the misunderstood technology of a bygone age. The fiction is a great read, and Jason Vey’s adaptation to DCC really captured the spirit of Saberhagen’s original work. Ian Miller agreed to paint the cover, and it looks fantastic. Fantastic! We announced this project more than a year ago and it’s finally ready to go.

This particular book is on my mind since I just reviewed the latest layout, so I thought I would share a few screen shots with you. Here are previews of several page spreads from within the book. You can see the graphic border treatment. Stefan drew the borders for most of the book, and Ian Miller contributed a different border design for the chapter of short adventures that will appear in the back. The book includes new spells for DCC, new monsters, a host of statted NPCs, technological items, and more. You may be asking, “Why is this for DCC instead of MCC?” - which is a good question. It can very easily be used in MCC as well (and the book includes Patron AIs) but there’s enough magic in this world that DCC makes more sense. Although you can easily use it for MCC as well.

But enough of this talk! Here are some sample page spreads. Enjoy! 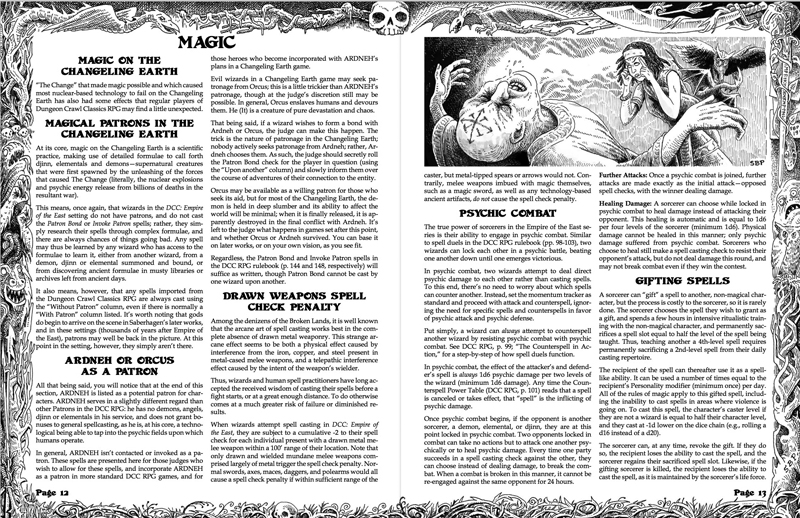 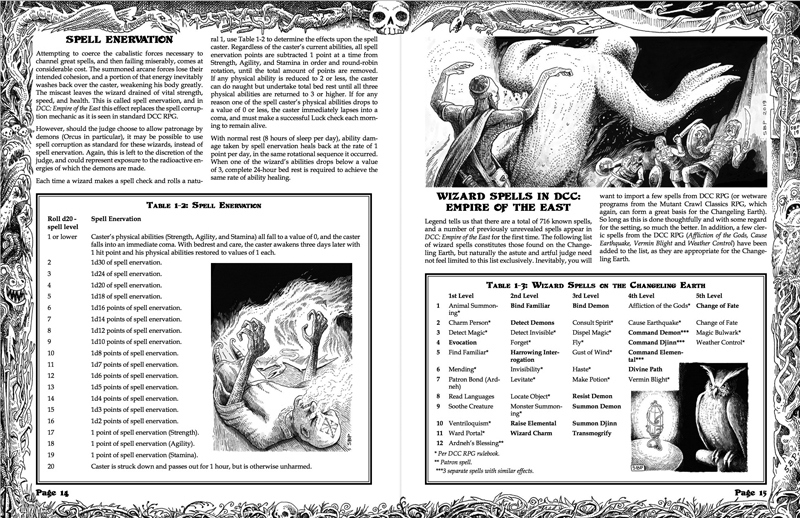 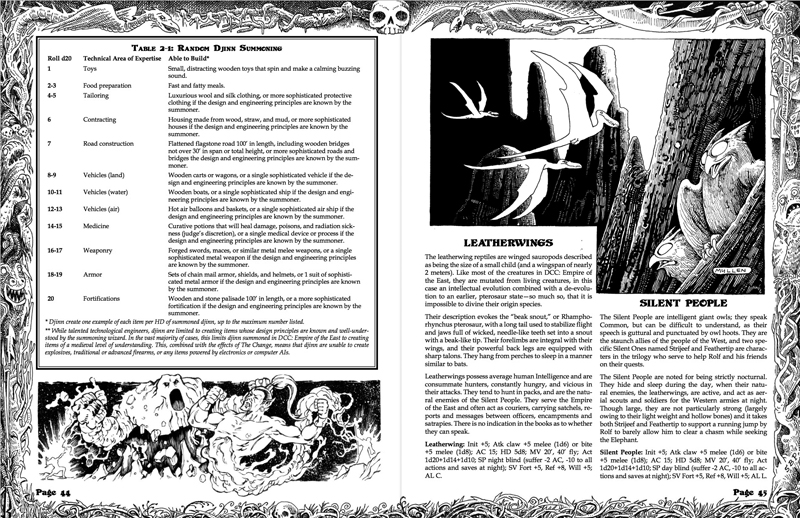 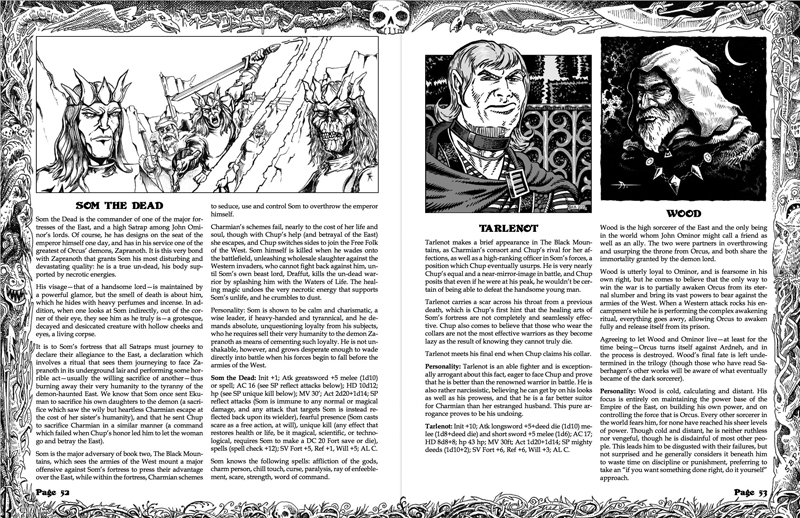 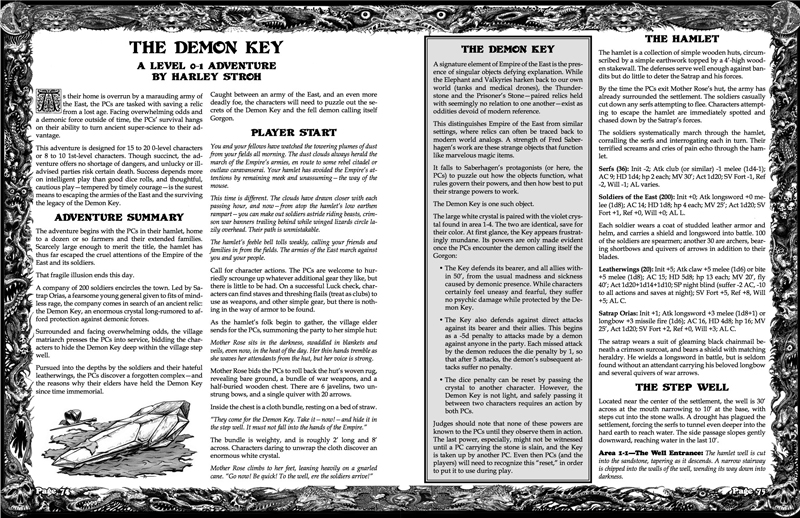 Kickstarter is up and already funded! Congrats Goodman games.
Top

i really love that it is no whistles and bells kickstarter. keeping it basic is great because i feel that most of us just want this and future dying earth box set as fast as possible in our hands.
Top

Well I have received my copy of the "Proofreader Edition" of EotE and I'm really happy.

I'm only up to page 25 but already I like:
I already submitted my first "Stomp the typo". I guess this isn't good news but it's still fun to be able to help in the creation of the book. And no worries, it was on page 20 so it took a while.

I also found what I believe is a Gygaxian term. Should I spoil it or let you guys find it?!?

If not, I will definitely be replicating parts of the trilogy in order to create a campaign.

Anyways, looking forward to feedback from other Judges. Back to reading.
Top
Post Reply
12 posts • Page 1 of 1

Return to “DCC Empire of the East”